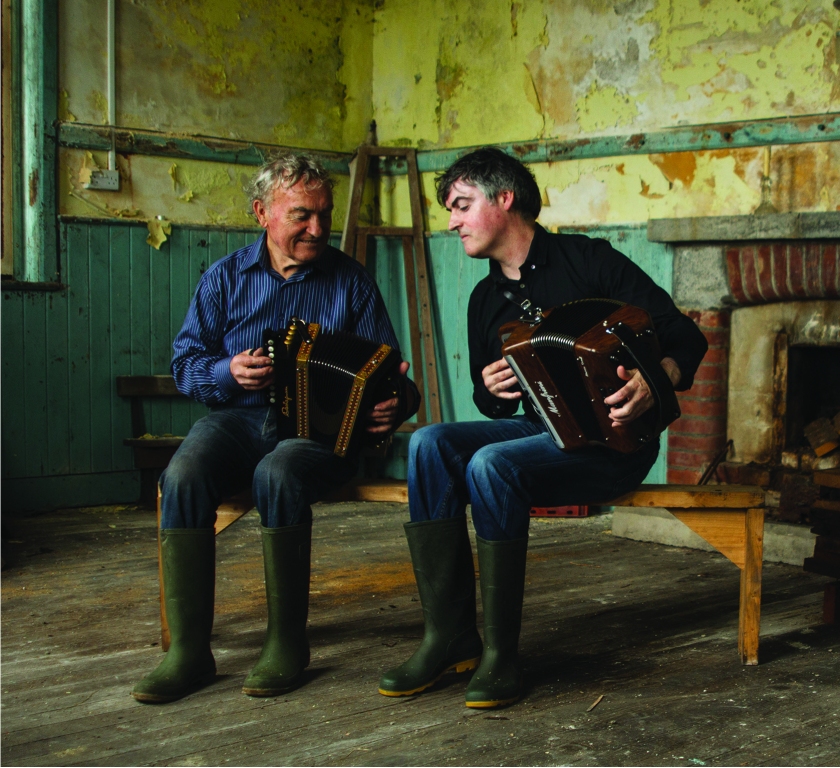 Johnny Óg Connolly is an internationally renowned traditional Irish musician and composer, who began playing the accordion at the age of nine. He learned from his father and from Micheál Ó Coistealbha, and began to win national awards by age eleven. At the age of fourteen he joined Na h-Ancairí, fronted by the legendary Conamara singer, John Beag Ó Flatharta. He spent eight years in the band playing in pubs and clubs around Conamara, and touring in England and America. In 1990 he made the first traditional album released by Cló Iar-Chonnacht entitled The Bees’ Wing.

In 1994 Johnny joined the Sean Keane Band and travelled widely with Seán in Europe and North America. In 1998 he recorded Dreaming up the Tunes, an accordion/banjo duet album with Brian McGrath. The recording received much critical acclaim. In the same year Johnny joined Michael Flatley’s Lord of the Dance and toured extensively in Europe, the Middle East and Far East. In 2003 he settled permanently in Conamara, and recorded a second duet album with Charlie Lennon, Dusk Till Dawn, in 2005.

Some of Johnny’s own compositions have been recorded by his father, the acclaimed melodeon player Johnny Connolly, and also by harp/flute duo, Michael Rooney and June McCormack, among others. His last solo recording Aisling Yoshua (Joshua’s Dream) featured five new compositions of his own, ranging from waltzes to polkas, along with traditional tunes he has enjoyed playing over the years. Aisling Yoshua was released in April 2011 and won Best Trad Album in the 2011 Irish Times Ticket Awards.

Alongside fellow musician & composer Mary Bergin, Johnny was awarded the Arts Council’s Traditional Arts Commission Award in 2012 (through An Gaelacadamh). Together, they composed a 40-minute suite, Sruth, which was premiered at Éigse an Spidéil in March 2013 and received a rapturous response from the audience. He has composed a great deal of music in the past two years, varying from traditional jigs, reels and hop jigs to laments and tunes in the Irish baroque style. Some of this music was premiered at Éigse an Spidéil 2015 as part of a collaborative work with two sean-nós dancers.

Johnny has recently released an album of his own newly-composed music, Siar. The tunes on the album are a mixture of various dance forms, including reels, hop jigs, flings, waltzes and marches. Each tune was composed for a friend or fellow-musician, which makes it a very personal album.

At the moment, Johnny is working on a 2016 celebration show involving twelve artists, musicians, singers, dancers and actors from the Gaeltacht regions. He has composed several pieces for the show. It will tour all along the west coast of Ireland in November and December 2016.

Other projects include composing musical settings for the poetry of Máirtín Ó Direáin for a projected song cycle to be performed by Liam Ó Maonlaí in the spring of 2017.

Is féidir cóip de Fad Saoil a cheannacht anseo. You can buy a copy of Fad Saoil by clicking on the link below. (€15 plus shipping)